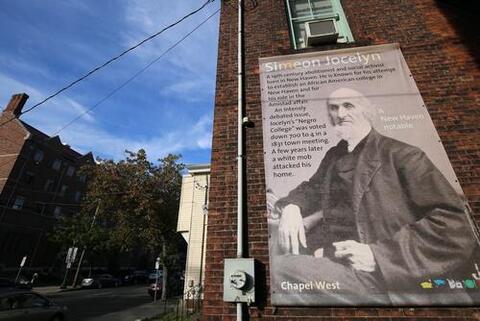 He was born in 1799. He made civil rights history. And he tried to make more.

Most antebellum New Haveners prided themselves on pursuing their fortunes without resorting to the use of slave labor. But for the abolitionist Simeon Jocelyn, mere non-participation wasn’t enough, and his efforts to pull New Haven forward would reveal that the city wasn’t nearly as progressive as he’d thought.

In the family tradition, Jocelyn grew up an artist. His brother Nathaniel became well-known as a painter, supplying many works of art to Yale’s early collections. Simeon himself was an engraver, a crucial role in pre-industrial printing.

But his truer passion was ministry, which he studied at Yale, and by the age of 25 he had become the leader of a church of free black people: Temple Street Congregational Church, the progenitor of today’s Dixwell Avenue Congregational Church and, according to a placard at Fair Haven’s Jocelyn Square Park, the first of its kind in the world.

It was in 1831 that Jocelyn and a committee of like-minded abolitionists, both black and white, upped the ante. They laid out a plan for a college-level trade school for black students, purchasing 20 acres of land near Yale. More money was being raised, and if the plan had succeeded, the result would’ve been America’s first institute of higher learning for black people.